Haven High Academy Sports Faculty organised and conducted another successful PGL Netball Tour to Liddington, Swindon. The tournament itself was organised and officiated by England Netball, with the students gaining the best possible game play and umpiring experiences with many receiving individualised coaching from the England officials. Three teams in total attended the weekend comprising of Year 7 / Year 8 and Year 9 students. During the student’s spare time they were provided the opportunity of experiencing outdoor adventure activities like climbing, Zip wire, Jacobs ladder and many more. All Haven High teams consistently displayed effort, determination and positive game results over the weekend and benefitted hugely from the experience offered from this Netball Tour. Our Year 9 team worked their way through to the semi-finals and achieved 3rd place overall within their age category. They were presented their medals by England professional Eboni Beckford-Chambers. 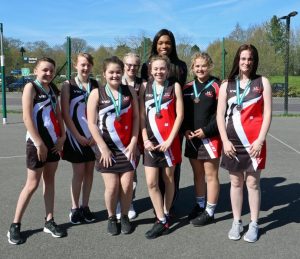